CMC Vellore: A case of ragging has come to light in the Christian Medical College (CMC), Vellore, Vellore, Tamil Nadu. Videos of ragging being taken in the medical college have also gone viral on social media. In the video, the ragging of junior students is being taken by senior students. During this, new students are being run half-naked. Along with this, they are also being harassed in many other ways. After the video went viral, from college to the government, action has come.

The principal has suspended seven senior students in a hurry after an internal inquiry into the matter. It can be seen in the video how the freshers are being brutally ragged by the senior students in CMC and they were treated inhumanly. The students have also made allegations of harassment in various ways. An anonymous complaint has also been received by the Principal in this regard. 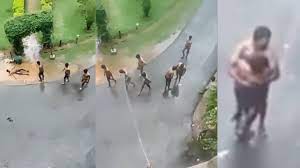 Ragging to an alarming level

junior students were hit on the private parts, they were taken to the highest height of the hostel and hung upside down by their feet. Clothes were stripped, slapped, and even beaten up. Even in the dining area, students had to take permission to sit or leave at a certain table. Students were required to remember the full name, district, and year of the seniors, failing which further ragging was done with the student.

Clothes were removed in the name of Mr. Hostel, the warden was also present ragging student said in a post on Reddit that the warden, deputy warden, and some doctors were also present as judges in the Junior Mr. Men’s Hostel competition held on October 9. During this, the new students were forced to show off everything except underwear. Also asked to imitate obscene acts can also be seen in the video that the students are walking around the hostel in underwear and water was being thrown at them from the other side of the fire hydrant.

It was reported that it was allegedly a walking race competition. As per the allegation, junior students were forced to participate in it. During this, they were also asked to imitate obscene and sexual acts with their classmates. Some students are seen doing such acts in the video. The video shows two students rubbing each other.